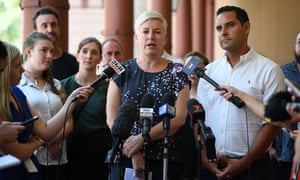 Music festival organisers have called on the New South Wales government to halt plans for a new licensing regime.

More than a dozen festival organisers and industry stakeholders, including representatives from the cancelled Psyfari and Mountain Sounds festivals, gathered at state parliament on Monday to discuss the proposed licensing scheme for music festivals, due to start on 1 March.

They want the new regime delayed until after the completion of the forthcoming coronial inquest into the deaths of five people who died after taking drugs at NSW music festivals in the last six months.

The music festival licensing scheme was announced following recommendations in the Keeping Them Safe report, commissioned by the government when Joseph Pham, 23, and Diana Nguyen, 21, died of suspected drug overdoses after attending the Defqon.1 music festival in September.

The government has not confirmed details of the new legislation, but interim advice issued by the NSW health department and dramatic increases in costs for police and medical services led to the cancellation of Psyfari and Mountain Sounds.

In a consensus statement issued after the talks, hosted by the Greens MP Cate Faehrmann and the independent MP for Sydney Alex Greenwich, the organisers called on the government to “go back to the drawing board” and properly consult festival organisers before developing any new regulations.

“There has been no public consultation and no genuine engagement with industry on the proposed changes,” the statement said. “There is widespread confusion about the details and impact of the new regime.”

The statement also backs the Don’t Kill Live Music petition, which has been signed by more than 105,000 people and warns music lovers that music is “under attack” from the premier, Gladys Berejiklian, and the Coalition state government.

The petition demands the government to convene a music roundtable to review regulation affecting live music, undertake a regulatory impact assessment on the new laws, be more transparent on costs for policing and medical services at festivals and work with the industry to keep festivalssafe. Signatories to the petition include a who’s who of the Australian music industry, including artists such as Amy Shark, Cloud Control, Bernard Fanning, Courtney Barnett and Dan Sultan, as well as record labels, tour operators, ticketing companies and music festivals.

The organiser of Psyfari, Steve Demian, said the proposed regime “almost comes across as a form of punishment for events which don’t sit right with certain authorities”.

Speaking before Monday’s meeting, Demian said the final form of the licensing scheme would make or break his festival.

If smaller events are not taken into consideration “then we will simply be priced out by the added costs”, he said.

The Berejiklian government has staunchly refused to consider pill testing as an alternative to law enforcement, saying it gives “the green light to drugs”.

Experts behind a successful 2018 pill testing trial at a music festival in Canberra have offered state and territory governments across Australia a free pilot program.

“Any government that is truly serious about keeping their young people safe should take it up,” the Pill Testing Australia spokesman and emergency doctor David Caldicott said in a statement on Monday.