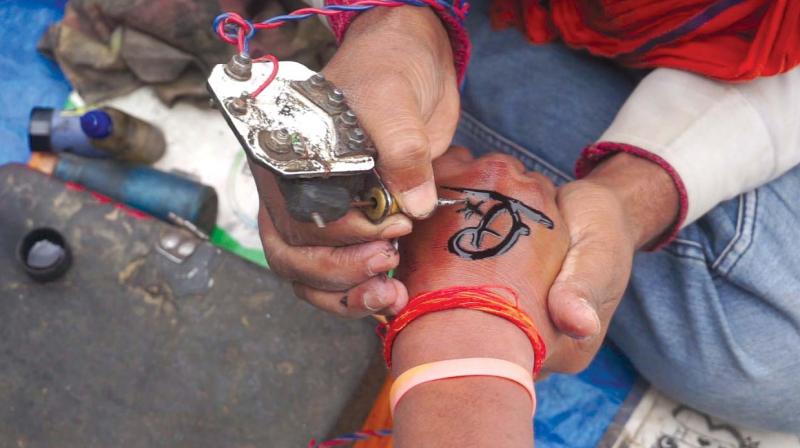 While modern equipment is usually used for tattooing today, the concern is that some unscrupulous tattoo artistes use unsterilised needles, putting their customers’ health at huge risk, as this can spread HIV.

Karwar: If tattooing is today popular among the “in” crowd in cities, it has been  common for a while now among the young and old alike in Uttara Kannada, where they get inked routinely on their wrists, ankles and other body parts with a design or two during  festivals, fairs and other public events. But now this “past-time” has come to an end with the district banning tattooing as a precaution against the spread of AIDS.

While  modern equipment is usually used for tattooing today,  the concern is that some unscrupulous tattoo artistes use unsterilised needles, putting their customers’ health at huge risk, as this can spread HIV.

Unwilling to take any chances, the Karnataka State AIDS Prevention Society (KSAPS)  recently wrote to the Deputy Commissioner of Uttara Kannada, Dr Harish Kumar , asking him to ban tattooing in the district in the interest of the people’s health. And in response,  Dr Kumar sent a circular to the CEO of the Zilla Panchayat, the Endowments Department, the district health officer, tahsildars and heads of all the urban local bodies, ordering them to ban the practice during all annual festivals and fairs.  “It has been observed that the number of those going in for tattoos is increasing during  annual festivals and fairs in the district. But there is a possibility of HIV transmission when  tattooing is done without sterilising or changing of needles. So tattooing should not be allowed during the annual festivals and fairs and action should be taken against those who are seen doing it. The committees in-charge of these events should be made aware of the seriousness of this,” the circular said.

According to some reports, Karnataka has the third highest number of HIV/AIDS patients in the country. By the end of 2017, India had around 21 lakh people living with HIV and the disease, though declining overall in the country, is said to be rising in some north eastern states.