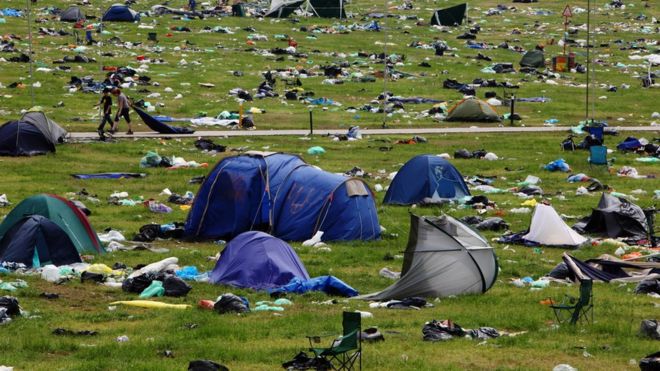 It’s the moment many of us dread at the end of every festival – taking down your tent and packing it up.

This is perhaps one reason why more than 250,000 tents get left behind in UK fields from Glastonbury to Reading and Leeds.

The Association of Independent Festivals (AIF) says some places advertise them as ‘festival tents,’ which gives the impression that you only need to use them once.

It says the average tent is mostly made of plastic – which is equivalent to 8,750 straws or 250 pint cups.

Jordan Bellamy, 23, has gone to Reading Festival a couple of times and admits he always leaves his tent behind.

“After a whole weekend of dancing I’m so tired, and the thought of carrying the tent back was daunting as my legs were killing.

“So at the end, we really only get our stuff together as in all our actual belongings and leave the tent.”

Paul Reed, AIF’s chief executive, says a major problem is the huge misconception about what happens to your tent.

“I think many people believe they’ll go to charities and the reality is that most won’t – they will go to landfill with no other option.”

This comes a year after the AIF’s Drastic On Plastic campaign, which pledges for festival sites to get rid of single-use plastic by 2021.

Paul says with the climate crisis more on people’s minds, urgent action needs to be taken, with the help of retailers.

“The research out there narrows it down to this – a third of abandoned tents at festivals can be traced back to major retailers like Argos and Tesco.

“I think a lot of it is to do with the marketing of these items and the implication these are festival items and only for single-use.”

In a statement Argos says: “We offer a variety of tents at a range of prices. They are all sold with a bag to encourage re-use.”

Tesco has yet to reply to our request for a statement.

“If it just is in a mess or it’s been battered by the rain or the weather then we will just end up leaving it in the field.

“I think for a lot of people the priority is just to get home as they’re feeling rough and not fussed.

“But me and my friends are trying harder now because we’re all trying to make changes to help the environment.”

For those heading to Boomtown Festival in Winchester in August, be prepared for a near zero-tolerance policy when it comes to abandoning tents.

Emily Ford, the festival’s sustainability coordinator, says there will be a campsite patrol at the festival.

The Eco Camp plans to create a zero waste space with people on hand to help festival goers keep the site clean.

Emily says: “If people aren’t living up to our ethos there’ll be a warning system and if people breach it, we may ask them to leave the Eco Camp.”

Matt Wedge will be running a free shop at the festival, providing tents and other items like camping chairs for a £10 deposit.

“It’s not illogical for someone who never goes camping to abandon their tent, you just need to convince them there is an alternative.”

Major festivals like Reading already have a policy, where they advise people to buy a durable tent to use again each year.

As for Jordan, he says he’s probably going to think twice when he’s packing up at the next festival.

“After hearing that a tent is equivalent to hundreds of plastic cups, I feel bad for leaving the tent there now.

“At the time it honestly really didn’t cross my mind but next time, I’m definitely not going to leave my tent there.”