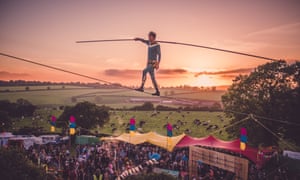 Returning to Gilcombe Farm (a couple of miles from Bruton village’s train station), for a fifth year, Shindig still aspires to be a party with friends rather than a full-scale festival. There’s an onsite pub, local stalls and several smaller performance areas rather than one main stage. The lineup so far includes Estelle, Huey Morgan, Benjamin Zephaniah, DJs Kenny Dope, Nu-Mark and Audio Bullys, plus circus, comedy, wellbeing activities and workshops for children and teens including breakdancing and djing. Festivalgoers are also encouraged to Get Fruity, the theme for this year’s fancy dress.
• 23-26 May, adult £154.45, teen (13-17) £79.90, under-12s free,shindigfestival.co.uk

It’s the third instalment of this three-day feast of electro, techno and alternative beats on a country estate in rural Norfolk, put together by DJ Craig Richards and the Gottwood team. Euphoric beats and limited phone signal help to envelope festivalgoers in this all-hours extravaganza. Think spontaneous back-to-backs and sunrise sets, in the natural amphitheatre Quarry stage and the lakeside Pavilion. This year’s line up is yet to be announced; in previous years it has included Seth Troxler, Horse Meat Disco and Ben UFO.
• 8-11 Aug, £199, houghtonfestival.co.uk

In the fields and woods of Bentley Wildfowl and Motor Museum, this compact three-day festival has a DIY spirit and programme largely made up of emerging artists sharing new live music, poetry, film, theatre and interactive art. Founder Marina Blake was just 19 when she started the festival in 2012 as a space for new talent. It still attracts a creative crowd and a troupe of volunteers, and with funding from the Arts Council et al, there is no corporate sponsorship. Hip-hop, jazz, world, house and more play out across several small stages-cum-art-installations, plus there are forest parties, collaborative jam sessions, and an onsite miniature steam railway and bird reserve.
• 12-14 July, £88, brainchildfestival.co.uk

What started as a party around a swimming pool (still in use) is now a festival, which has spread its homely vibe across several fields in the grounds of private residence Standon Lordship. This year’s theme is Twisted Creatures: a Strange Evolution – walking fish, flying dinosaurs and underwater birds – and on the Saturday festivalgoers don elaborate fancy dress for the parade and competition. Headliners include Wolf Alice, Rag’n’Bone Man Nile Rogers & Chic and Friendly Fires, plus rockaoke, talks, workshops, a wild spa, a dog show, and plenty of parties after dark.
• 25-28 July, adult £171.74, young adult (16-17) £161, teen (13-14) £150, child (4-12) £49.46, under-4s £6.50, standon-calling.com

Pirates, mermaids or lost boys? Festivalgoers at Neverworld are encouraged to join one of three tribes in fancy dress. The fantasy theme runs throughout the grassland site backed by woods near Hever, with a sandy beach party arena, a fortress stage, a pirates’ goldmine rave, and Pan’s playground running family workshops. Thanks to a healthy dose of teen rebellion, the festival formerly known as LeeFest was started by Lee Denny in his back garden when his parents were away on holiday 2006. It keeps the crowd small, but bills big, with the Vaccines, Sleeper, Craig David and Lucy Spraggan performing this year.
• 1-4 Aug, adult £159.40, teen £59.12, child (3-12) £26, under-3s free, neverworld.co.uk

In a glen on Scotland’s west coast, 33 miles from Glasgow, the gardens of Kelburn Castle host this “cultural safari” weekend, with secret performances in the Chinese garden, pop-up events in a waterfall, a DJ treehouse and an acoustic tipi. Adventures extend out into the forest via art installation trail Neverending Glen winding around the valley and out to the sea. Acts include Leftfield, Gentleman’s Dub Club, plus disco, jazz, electronic and more. The 13th-century castle itself will be turned into a giant work of street art by Brazilian graffiti artists, creating a riotous centrepiece for the weekend.
• 5-8 July, adult £128.50, youth (13-17) £90.50, child £40, kelburngardenparty.com

This June 10 stages of music will celebrate 10 years of Gottwood, a small forest festival championing electronic labels and underground acts. The campsite is a short walk from the coast at Holyhead, good for some morning-after downtime by the sea. House and disco play out across a lakeside country manor and in the surrounding woodland. Alongside the music there’s film, forest art, projection mapping and installations including a laser room stage.
• 6-9 June, £192, day ticket £60, gottwood.co.uk

The smallest festival of this bunch, Field Maneuvers brings the club to the field, welcoming 800 partygoers for three nights of music, including Ben UFO, Or:la and Ryan Elliott. A self-proclaimed “no-frills rave”, the pared-back event has just three dance tents, including a small laser-filled geodome. Between stages there’s a handful of food and drink options, including a 24-hour bar and an all-hours tea tent to accompany the round-the-clock beats.
• 30 Aug-1 Sep, £152.90, fieldmaneuvers.com

Billed as not just a festival but as a three-day nature fix, a place to inspire ideas and try new activities, this party for just 1,000 guests takes place at lakeside Park Farm, eight miles east of Stratford-upon-Avon. This year’s theme is Out Of The Woods, with the 50 acres of Capability Brown-landscaped grounds offering space for activities such as forest bathing, wild swimming, talks, and new music from gypsy swing to a gospel brunch. Activities include immersive dining experiences, clowning workshops, urban birding, ceramics and other crafts.
• 5-7 July, adult £120, child (8-17) £50, under-8s free, family of four £275, also-festival.com

Americana music has seen a surge in popularity in the UK in recent years, and after the success of its first year, Black Deer, a few miles south of Tunbridge Wells, returns for three days of bluegrass, folk, blues, gospel and country. Band of Horses, the John Butler Trio and the Staves are on the bill, while the team behind the Grillstock barbecue festival provide southern, meaty flavours and cooking demos. There are also artisan craft stalls, children’s workshops, music lessons and vintage airstreams for rent.
• 21-23 June, adult £166, junior (6-17) £75, under-5s free, day tickets from £45, blackdeerfestival.com

All About Love, Somerset

One of the UK’s best wild swimming spots, Warleigh Weir, near Bath, is the new host for All About Love. If you make a beeline for the Healing or Green Field at Glasto, All About Love will probably appeal, with its focus on appreciating the surrounding natural environment and alternative therapies. There’s also live world and electronic music, talks, and children’s activities, including den and raft building. After last year’s threat of closure due to the amount of litter left by visitors, it is hoped the event will encourage care and respect for this natural beauty spot.
• 6-10 June, adult £133.84, accompanying children free, allaboutlovegatherings.com

Once a predominantly psytrance event, Noisily has widened its beats to incorporate bass, house and techno over four days in hilly Coney Woods. With a free-spirited vibe, it aims to give arts and healing an equal footing alongside the music. There are art installations, dance and aerial performance, workshops including drumming, DJing and crafts; a spa and alternative therapies, such as sonic healing and acupuncture; and other activities from body-positive boob printing to mushroom cultivation.
• 11-15 July, £186.85, noisilyfestival.com

The barns and fields of a working farm host local and international folk and rock acts by day, with drum’n’bass and disco by night. The bill so far includes Foals, Slaves, Public Service Broadcasting and Two Door Cinema Club, plus theatre and comedy. Truck started 20 years ago in reaction to the commercialisation of the mainstream festivals, and still aims to create a small-scale, local event, with family activities and food vendors from the village, including ice-cream sold by the vicar.
• 26-28 July, £128, truckfestival.com

Set in the fields and woodland glades of a working farm in the Herefordshire hills, Nozstock is a family-run affair which started as a backyard barbecue. It might have been going for two decades, but it keeps the vibe old-school and audiences small. There’s an eclectic mix of acoustic sets on the bandstand and drum’n’bass in converted cowsheds (apparently farmer Noz is a fan). Larger stages host everything from ska to hip-hop acts. The theme for this year is the Wizard of Noz, with Rudimental and Soul II Soul headlining, plus film, theatre, spoken word, wellness activities, family games and crafts.
• 18-21 July, adult £153.70, teen £106-£116.60, under-12s free, nozstock.com

All ages are encouraged to join in the outdoor play and adventure at this festival just outside Dartmoor national park, west of Exeter. Activities, set across the hilly lakeside fields of Great Fulford estate, include paddleboarding, archery, walkabout theatre, wood-fired hot tubs and children’s games such as a “dragon hunt”. The music lineup spans folk, swing, electro, reggae and more, including DJ Yoda and Too Many Zoos.
• 12-15 July, adult £108.90, teen (15-17) £86.90, tiny teen (11-14) £42.90, under-11s free, wonderfields.co.uk

Run by the guys behind Totnes indie record shop Drift, this little festival takes place in green spaces around town and on the grounds of Dartington Estate, with some performances in a church, a cinema and a 1930s gymnasium hall. Confirmed to appear so far are Metronomy, the Comet is Coming, Gruff Rhys and comedian Stewart Lee. There are also talks with Brass Eye director Michael Cumming, author and former Slits guitarist Viv Albertine, and more from creative partners including Heavenly Recordings, Bella Union, Moshi Moshi, Rough Trade Books and the Quietus.
• 24-26 May, adult £94, young adult (12-18) £41, under-12s free, day ticket £51.94. Weekend camping £30pp extra, seachangefestival.co.uk

One of a number of festivals kickstarting the season on the late May bank holiday weekend, Alfresco brings an electronic musical spectrum of acts to a small woodland in Paddock Wood near Tonbridge. This year’s bill includes 2ManyDjs, Joey Negro and Erol Alkan, plus emerging underground acts hosted by labels and clubbing brands such as Sancho Panza. Alternative daytime entertainment comes in the form of hip-hop karaoke, musical bingo and comedy, DJing, circus, arts and sports day fun for kids and teens .
• 23-27 May, adult £119.90, children (5-17) £38.50, under 5s free, adult day tickets from £38.50. Weekend camping extra, from £31.90 per tent, alfrescofestival.co.uk

In Etherow country park near Manchester, Moovin is a feel-good party influenced by the 1990s rave scene and founded by Haçienda DJ Herbie Saccani and former Sankeys owner Paul Fletcher. Soul II Soul, Morcheeba and Big Daddy Kane top the bill, alongside emerging DJs playing funk, soul, house and R&B. Performance spaces include the Barn, an open-sided cowshed complete with hay bales to chill-out on (but minus the cows, who’ll be on holiday in nearby fields), and the Balearic Sound System tent in the campsite. Capacity is kept small, food and cocktails ethically-sourced, and there’s wellness, circus and other creative activities around the site.
• 23-25 Aug, £104.50. Weekend camping extra, from £22pp, moovinfestival.com

This new festival involves outdoor fun on the farm and the coast just outside Rock and close to the Camel estuary. The site has a surf school and offer SUP lessons, boat trips, yoga and other workouts on the beach. There’s also a welcome supper of wood-fired paella on long tables (included in the entry price) and other feasts bookable in advance. Tom Odell, Giles Peterson, Mystery Jets and Villagers are among those set to perform so far, plus a programme of fireside talks, foodie workshops and children’s activities, from kite making to family games.
• 24-26 May, adult £189, teens (13-17) £94.50, children (5-12) £25.20, under-5s free, adult day tickets from £47.25, porthillyspirit.com